As we learned in part one of this series, using primers to encourage strong, deep roots is critical under periods of extended heat and low-moisture. However, it’s also important to continue providing the crop with a proactive nutrition plan, particularly during periods of stress.

To continue to support the root system, Dr. Abdel El Hadrami, CEO and R & D Director for OMEX Agriculture Inc. recommends applying liquid foliar fertilizer (foliars) throughout the growing season. This will supply the plant with enough energy to continue searching deeper into the soil for the moisture and minerals required to grow and thrive.

Foliars that are rich in phosphorus and manganese will help drive the roots down to find enough moisture for optimal flowering and seed set. Phosphorus, referred to by Dr. El Hadrami as the ‘energizer nutrient,’ is responsible for transferring energy within the plant, contributing to maximum growth and health of the crop.

“In our field-scale canola trials conducted in Saskatchewan during the 2015 drought, we were driving roots another four to six inches down and preserved a 6 bu/ac using the foliar treatment over the untreated areas,” he continues.

OMEX also has data on several prairie crops from 2012, which was another dry year. The yield preservation was of similar amplitude, ranging from 2–6 bu/ac, depending on the crop and variety.

Foliars last seven to ten days in the plant and bridge nutritional gaps resulting from the inability of the soil to transfer nutrients due to drought or excess moisture. According to Dr. El Hadrami, producers have at least three chances to use foliars during the growing season, as they are applied at the same time as pesticides – usually tank-mixed with herbicides and fungicide.

“Foliars are absorbed by the leaves depending on their point of deliquescence, which is the ability of dry material to absorb water from the air,” says Dr. El Hadrami. “It’s why we put rice grains in a salt shaker in humid areas – table salt absorbs water from the air when the humidity is higher than 75 percent.”

Dr. El Hadrami says that it’s important to note that nutrient absorption is affected by the form of nutrient. Chloride’s deliquescence point is low – only 30 to 40 percent. It solubilizes quickly, enters the leaves faster and can cause burn, depending on the rate. Sulfates, on the other hand, require near-saturation on the leaves – 90 to 95 per cent – to be absorbed, allowing them to be taken up slowly with fewer issues of leaf burn.

As with any technology, Foliars can have their detractors, but Dr. El Hadrami is quick to point out that proper application is the key to absorption and efficacy – especially during high temperature/dry soil conditions when plants conserve water by closing stomata (the microscopic pores or holes in the leaf and stem surfaces of plants used for gas exchange).

“Foliars are not only taken up through stomata,” explains Dr. El Hadrami. “Only small size particles are; others are absorbed by diffusion through the cuticle. Foliars are recommended for spraying early in the morning or late going into the night when dew is available on the leaves. Arguments on temperature and dry weather do not apply here.” 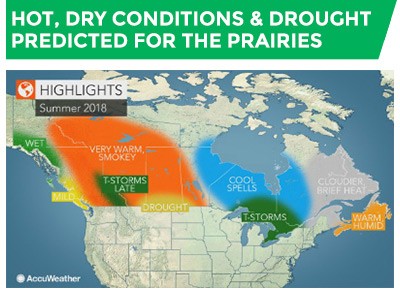 For instance, Dr. El Hadrami notes that he is seeing better responses to foliar-applied boron when it’s hot and dry. Even when stomata are shut down and there is no translocation of boron in the plant, foliar spray provides the flowers with enough boron to optimize pollination and pod setting.

Although it remains to be seen how long this year’s drought conditions will persist, as Dr. El Hadrami points out, if the conditions shift from too dry to too wet, a treated crop will be better predisposed to deal with excess moisture than an untreated one.

Talk to your retailer or OMEX sales representative for more information on how OMEX Primers, Starters and Foliars can contribute to the success of your crop, even under drought conditions.