The Green Revolution of the 1960s sought to greatly increase agricultural production through the introduction of high-yield crops, chemical fertilizers, and synthetic herbicides and pesticides. With these new advancements, it was suddenly possible to grow more food on the same number of acres, to better meet the needs of a growing global population.

One thing that became somewhat overlooked during the Green Revolution (and the decades that followed) was soil organic matter. However, we are finally starting to recognize the value and impact that soil organic matter content has on crops, and actions are being taken to improve it.

The humus fraction of soil organic matter plays a major role in soil biology. Humus can be divided into three major groups: humins, humic acids (HAs) and fulvic acids (FAs). The roles of both HAs and FAs in soil and plants have been well-studied and they are recognized as major biostimulants. They do, however, make up such a small part of soil organic matter that it will take years to reach an adequate level before we can see their benefits.

Humate-based products have been proven to be an option to achieve similar benefits offered by soil organic matter as they are mineral salts of humic or fulvic acids. 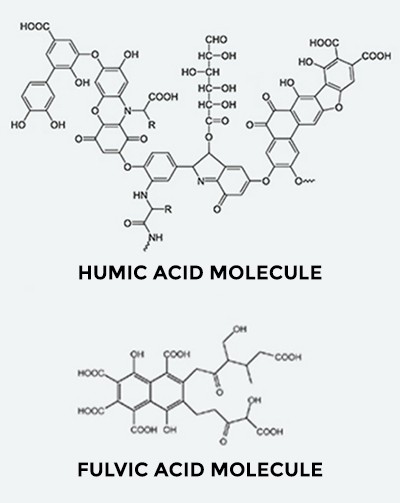 Humic acids are a large molecule with a molecular weight ranging from approximately 10,000 to 100,000. HAs are only soluble in alkaline solutions and the molecules are too big to be absorbed by the plant; however, HAs can efficiently bind to clay minerals to form stable clay complexes.

In addition, with a cation exchange capacity (CEC) between 300 and 500 cmol/kg, the HA polymers are able to chelate with different nutrients, making them less prone to leaching in soil sub-horizon.

Overall, humic acids have an indirect effect by acting as a soil conditioner and, in addition to promoting aggregation, soil porosity and water retention, will enhance microbial activity in the soil.

A smaller molecule than humic acids, fulvic acids have molecular weights ranging from roughly 1,000 to 10,000. One of the greatest advantages of fulvic acids over humic acids is that FAs are soluble in all pH conditions and are small enough to readily enter plant roots, stems and leaves.

With a CEC ranging from 520 to 1120 cmol/kg, fulvic acids are a very efficient chelating agent and carrier for trace elements from the plant surface to plant tissues.

Interacting with phytoregulator pathways and nutrient root uptake regulation, fulvic acids have a direct effect on plants as biostimulants.

Another potential use for humic and fulvic acids is for protection from abiotic stress; heat, drought, UV and salt stresses. And, interestingly, mixing HAs and FAs with products that contain kelp will improve their effectiveness. When applied together, they enhance production of an antioxidant agent called superoxide dismutase.

Superoxide dismutase is a catalytic enzyme that acts as a sponge to remove free radicals and protect the chlorophyll molecules, cell chloroplasts and membranes. This anti-senescence action will allow the plant to stay green longer and to recover faster from stress.

OMEX Has the Solution

OMEX’s OrganoHumeTM is a liquid formulation made from a naturally occurring type of oxidized coal that is very rich in humified organic matter, humic and fulvic acids, with minimal impurities. OrganoHumeTM may be used as a soil amendment, foliar spray or fertilizer enhancer to maximize nutrient uptake.

If you have questions about how OrganoHumeTM fits into a sustainable nutrient management plan, contact your OMEX representative today. In addition to providing great information on humates, your rep can help you meet your yield and quality goals by creating a nutrient management strategy that includes seed-applied Primers, in-furrow Starters, in-crop Foliars and other specialty products.

This is the second in a three-part series on Biostimulants. In our next post, we’ll be demystifying Plant Growth Regulators (PGRs) and Plant Growth Stimulators (PGSs). In case you missed it, be sure to read Biologicals: What Are They? for an introduction to agricultural biologicals.

Soil Testing: What Should You Look For?