With the growing season in full bloom, I touched base with Manitoba producer Art Enns for an update on the canola field we’ve partnered with him on in support of the Manyinga Project. 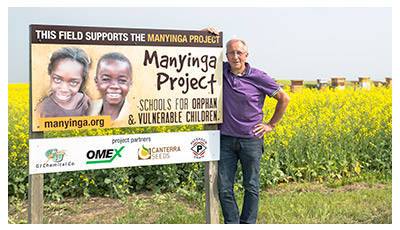 OMEX partnered on the project with a contribution of High Performance Plant Nutrition Products to help maximize yields and, ultimately, the proceeds from this field. 20 acres were treated with OMEX products, and 20 acres were left as our check. When I gave Enns a call, I was happy to hear how impressed he was with his crop’s growth so far.

“I was away for a week, and when I came back I couldn’t believe how much the field had changed,” he told me. “I’ll be honest, it’s a pretty incredible field.”

Enns attributed the field’s progress to a combination of good weather and the OMEX C3 Foliar Fertilizer he applied with his Clearfield treatment. He said the C3 helped the crop bounce back quickly, and it’s been growing strong ever since.

Strength isn’t the only difference Enns has seen. He says the treated half is also growing taller and even has a slightly brighter colour. For Enns, no field is ever perfect, but this one is very close.

“I never rate any field a 10 out of 10, but I’d rate this one at an eight or nine. Very high up in the ratings for sure; it’s looking awesome.”

“I’m really pleased with how it’s progressed up until this point; the growth has been very good. Lots of people have complimented me on the field because it’s just really nice. I’m pleased I’ve had the chance to work with OMEX and to use some of these products.”

This would be great news for any field, but we are especially happy knowing the generated proceeds will help improve the lives of children in need. The greater the yield, the greater the contribution to the Manyinga Project and the amazing work it does.

As for the rest of the season, Enns says bad weather is just about the only thing that could potentially compromise the crop’s growth, but he has high hopes for harvest.

“It’s still got a long way to go, but I’m very optimistic about it. If it’s as successful as it looks like it’s going to be, it will be good.”

We’re thrilled to hear Enns has had such a positive experience with High Performance Plant Nutrition and we look forward to sharing more updates on this “incredible” field supporting such a good cause.

If you want to learn more about the Manyinga Project and how you can get involved, visit manyinga.org.